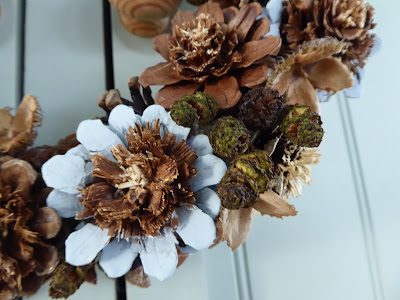 Autumn is my favourite season, especially when the weather is fine and dry, which it hasn't been this year, but never mind.   I can always find plenty of things to forage and collect while I am out on my walks.      Pine cones, alder cones, beech nut cases, to name but a few. 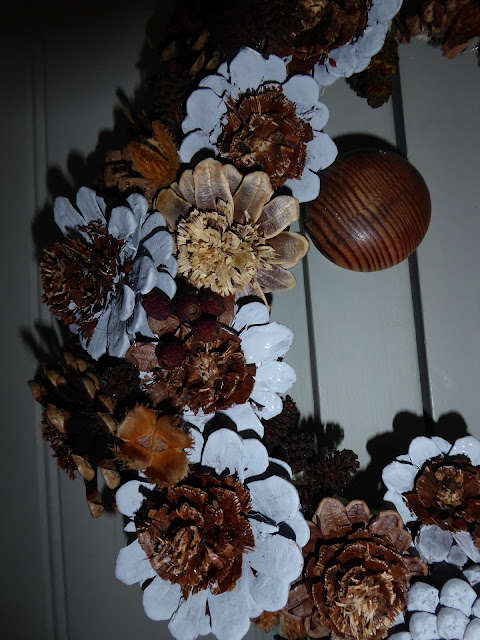 I have collected oodles of them, to make winter wreaths.

Several hours were spent wielding the pruning shears, trimming pine cones, painting some, bleaching others, snipping and wiring to a wreath made from some honeysuckle vines which I pruned a couple of weeks ago, then formed into a wreath shape. 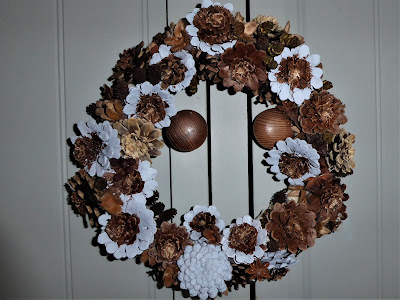 I need to add a loop of wire to the back, for hanging, but then it is finished. 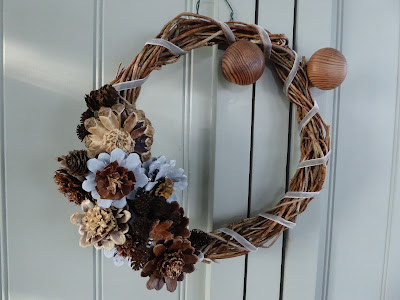 I also made this one, much less work, and I like the simplicity. 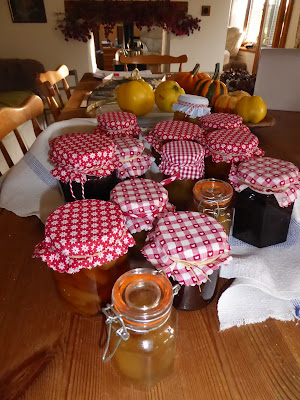 I have been fairly busy in the kitchen.

Apricots in Brandy, Prunes in Port,  Ginger in heavy syrup, and  Ginger in Brandy Syrup plus a couple of containers of Quince paste.


They will all be going into Christmas hampers.


I managed to fit in lots of long dog walks, despite the wet and muddy fields.    Toby still hates getting wet, but he is much more resigned to having to wade through deep puddles, especially when the alternative is to be left behind - of course I wouldn't leave him behind, but because I just walk on at the same brisk pace as normal, he thinks that is going to happen, so he delicately (for a chunky Labrador Cross) picks his way through, skipping with joy when we reach dry land.

This morning's walk was much drier though.   We went out along a bridle way which I haven't walked since the Spring.     I am so glad that I did.

I had forgotten to take my camera or glasses, but when I spotted some pink flowers in the ancient hedgerow, I was intrigued enough to snaffle a couple of leaves and the accompanying flowers so that I could attempt to find out what it was. 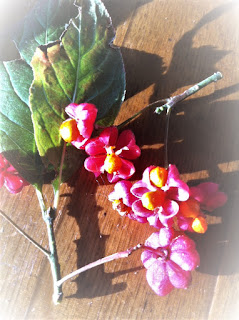 Spindle!     Tiny, brilliant pink flowers with bright orange berries.  According to the Woodland Trust it is an indicator of ancient woodland - and just one field away there is indeed a patch of ancient woodland - the woodland which covered the area after the last Ice Age, 10,000 years ago, a rare and special habitat.

The wood of the Spindle tree has been used to make spindles, toothpicks, skewers, viola bows,  knitting needles, pegs, and bird cages, according to Richard Mabey in his book 'Plants with a Purpose'.

The berries are 'fiercely purgative', poisonous, some say, but they were dried, powdered, and then rubbed into the hair of boys to rid them of lice, he doesn't say why it was only used on boys.

A Stolen Sheep and the Village Hall

Sunday afternoon was one of those rare occasions when there was an 'event' in our tiny village hall. 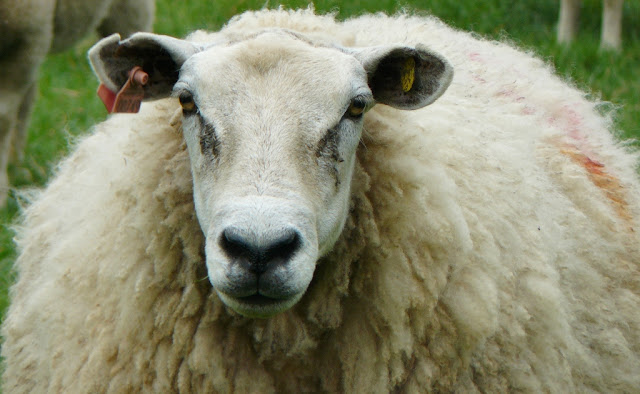 Mr Digby had very kindly set up the hall with displays of some of the history of the village and surrounding area.      Over the last decade or so he has gathered together old photographs, maps, newspaper cuttings, oral history, documents and books and snippets of fascinating facts. 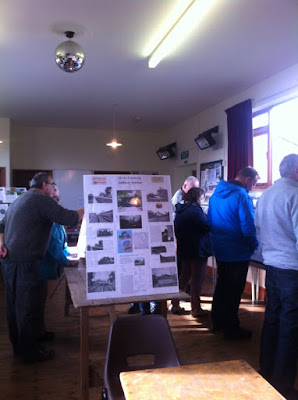 I persuaded my husband, daughter, and granddaughter  to attend, too.   They soon melted away, but I spent an hour there and during that time there were about twenty-five visitors, including several born and bred villagers, who found that there was plenty to bring back memories, along with fascinating stories and facts which they hadn't known about.

A farming friend was thrilled to find that the old blacksmith's ledgers contained notes about work which had been done for her father, back in the late 1940's.    When the blacksmith died, a couple of years ago, papers and ledgers were dumped in a skip.   Luckily, Mr Digby was able to get permission to rescue some of them! 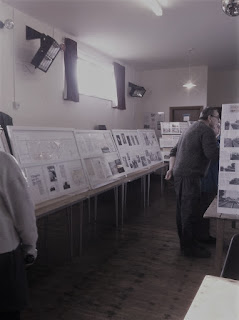 One story which I thought I would share with you is the tale of a 25 year old man who lived in the village in the 1840's.    He was arrested, tried and convicted of killing a sheep and stealing 3lbs of wool from the carcass.  His previous convictions included the theft of a smock and a hat worth 1 shilling, for which he received 3 months imprisonment with hard labour.    The sentence for killing the sheep was transportation to Tasmania, for 15 years.
He was transported in 1841.
There were no notes about whether he ever returned.

Difficult to pick out just a few stories, there were so many - including the tale of a house which was being renovated, but simply collapsed when the roof was taken off, which must have been a bit of a shock for the couple who owned the place.    Luckily, they were granted permission to rebuild, providing they stayed within the original footprint of the house!


The tales of the Naughty Nuns, I will leave for another time.


One story which wasn't covered, was that of a local landowner/farmer who was so convinced that his horse was going to win a race, that he used his farm as the stake... the horse lost the race, and he lost his farm...his poor wife and family!

Sounds like a story from long ago, but in fact it happened around the 1950's.
The family still live locally.


I have harvested my quinces - they are much larger this year and I am delighted to say that they smell heavenly.

One has been added to an apple crumble - and it really added to the flavour.    One or two will be sliced and added to trays of roasted vegetables...then I move on to the much more exciting quince butter and membrillo.     I just need the free time to get cooking.

I have been working for an hour or so each day, cleaning out the ditches which surround Owl Wood...my back is not happy.     Two more days should see the job completed.   Thank goodness.

A Morning with Miss Read

My intention was to begin a new blog, something entirely different from Tales from Parsonage Cottage.   I haven't so much failed, as simply not found enough time or energy to do the deed.

I am back again, for a while.

This morning's dog walk was wonderful, despite the squelchy, sodden ground.  The air was cold, the sky a brilliant blue, the sun shone.     Hedgerows glowed with brilliant red rosehips and hawthorn berries.

I had arranged to visit Miss Read, so I dropped Toby back home, then walked back through the village.   Normally I can walk through the village without seeing a soul, today was completly different; friends I hadn't seen for ages appeared around every corner - each one requiring a conversation and a catch-up.    It took half an hour to walk the usual five minute route to Miss Read's home.

She was a little tired today, her emotions were not far from the surface.   I hope my visit, and the long chat we had over a pot of tea, helped to cheer her up.

I came away with a bundle of papers, she has been writing some more of her memoirs, more fascinating tales which I am going to type up for her.

She had also written a story, a kind of quiz, ready for our next village hall meeting for anyone over the age of 55 years.    Yes, our monthly meetings are still taking place, we limp along from month to month.   September's meeting was brilliant, we had a retired archaeologist in to talk about the history of the villages around and about.   Fascinating stuff.