The Consequences of an Argument

Charmouth is a coastal village at the mouth of the River Char,  on the Jurassic Coast - very popular with fossil hunters - even Jane Austen, the novelist, is said to have enjoyed some holidays there.


On September 14th, 1822 Robert Best was staying at one of the old coaching inns.     He had no work that day so he spent the afternoon exploring the village.

As always,  he had his commonplace book with him, for it was his habit to fill it with  'Anecdotes, Epigrams, Epitaphs, Acrostics and Extracts of Humourous, Moral, Historical, Biographical and Miscellaneous Nature.'

Here you can see any example of his beautiful penmanship.

I have his book, volume III, filled with handwritten notes and dedicated to his wife, Mary.    She was back at home in Bristol, with their three children.


Eventually he found himself in the churchyard of St Andrew's reading gravestones and noting down those which he found interesting.    I'm not sure what the church would have looked like in those days because the image above shows the church as it was rebuilt in 1836, long after Robert Best's visit.

This large, tabletop tomb was already in situ though and if you enlarge the image above you will see it near the church door.   It is the grave of James Warden who died on 28th April, 1792 he was 56 years of age. 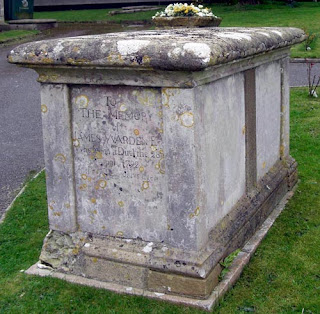 I imagine that it was the fact that he fell in duel which got Robert's attention!


James Warden became Charmouth's Lord of the Manor in 1788 after a distinguished career in the Royal Navy.      Unfortunately, he seems to have been quite an argumentative type of man, even going so far as to disinherit his son.

The story goes that he got into an argument with a neighbour, Mr Bond, previously a friend of his.   One thing followed another and a challenge to duel was issued.    The date and time was arranged and duelling pistols were acquired by James Warden's wife, for it seems she did nothing to try and stop the duel, some say she even encouraged it.

Warden won the right to take the first shot of the duel, but it passed through his opponent's hat.    The return shot was deadly accurate and James Warden died immediately with a bullet in his heart.

His body was taken back to Charmouth for burial and Mr Bond was said to have fled to Barbados to avoid the legal consequences.


Here is the page from Robert's book.   It shows the four verses which were said to have been written by James Warden's widow.

Time has erased most of the lettering from the tomb, but still they live on in Robert Best's book.