Mouldy Old Dough when Yeast is in Short Supply

The merry month of May,  has ended.   It has been an enjoyable month, I think.    Nothing special, but nothing bad either.    The days and weeks have flown by.

What have I been doing?    Quite.   I often ask myself the same question.

Truth to tell, the month passed pleasantly, but it had a dreamlike quality about it.  I suppose certain anchor points are missing due to lockdown so every day seems much the same.

Enough of this rambling.   Back to the title, mouldy old dough. 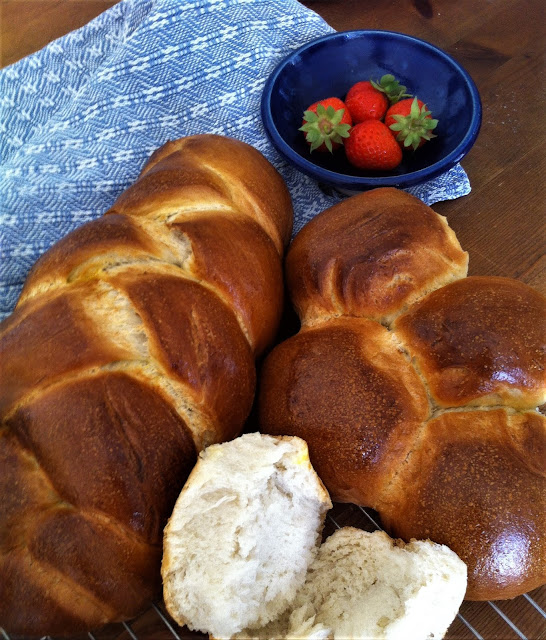 Yeast became really difficult to obtain once everyone got into panic buying.   It was as though everyone had suddenly decided to fill their store cupboards with loo rolls, hand gel, and yeast.

I was lucky, I already had a couple of small tins in the pantry, but I know a lot of people were very frustrated when they were unable to get their hands on some.  Sourdough is an option, but I really don't have the patience to pamper the starter.

I recently came across a really useful tip from Shirley Goode - perhaps some of you will recall her television and radio appearances and her abundant  money-saving ideas and kitchen tips, though I daresay that most of you will be too young to remember that far back.

Her 1981 book, More for your Money, gives her version of Sourdough which she presented as being useful 'during the inevitable bread strikes'.     It is equally useful during times of yeast shortages.   I tried it out last week, just to make sure that it really works.   It does.

'All you need to do is keep back a small lump of dough, about the size of a small apple, from your baking and leave it in a small basin covered with water for about 4 days.   As it rises, turn it occasionally so that the top gets wet.   It will begin to smell sour after a few days and will then collapse into the water.   This is when it is ready to use.   Stir it well and add 1 tsp sugar.   Stir in the required amount of warm milk or water according to the recipe you are using, add to the flour then make the bread in the usual way.'

It takes a little longer than normal for the dough to rise, but I find that it works beautifully.    The most difficult part is remembering to save the piece of dough for the next batch of bread.