This morning I was busy doing some research on the internet when I came across an article written by a journalist with an unusual surname.   Next to the byline was a very small photograph.  Suddenly my brain was on high alert.    There was something familiar about the shape of the face, the darkness of the eyes.   The bright ginger beard threw me a little, but the face I was beginning to remember was that of a beardless pre-teen boy, I began to think that this could be the son of an old friend of mine.  Correct name, red hair, but could it really be that same boy all grown up?

A couple of searches later and I knew for sure.   Carol's son.

I can clearly remember meeting Carol for the first time.    I had recently returned to Lincolnshire from the Middle East and was waiting to collect my children from their new school.      I fell into conversation with an extrovert character with a very strong Liverpudlian accent.

By the time we had walked our children the few hundred yards along the road to home, we had already laughed our heads off.   She was that kind of woman.   Always ready with a funny observation, or a joke.    She was never seen without full makeup, styled hair, and wearing something from her wardrobe of fabulous vintage outfits which had cost very little because no one else had begun collecting them then.   She got me into some bad habits!

It was a nice kind of friendship.   We would take the occasional trawl around charity and antique shops, or go for a coffee somewhere, we didn't spend a huge amount of time together and yet we were real chums.   It suited both of us, we were both friendly but private people.

Carol had her own business buying inexpensive items, which she would clean and titivate, then present them so beautifully on her stall at antique fairs and the antiques centre that they sold like hot cakes.  On one occasion she turned up at my house, along with her long-suffering husband and his van.     I soon found out why.  She had seen an armchair which she just knew would be perfect for the corner of my dining room.     Her husband hauled the thing in and put it into position, as directed by Carol.    It was the very thing that corner had been lacking.   It was a gift, she wouldn't take any payment.    I had the chair for many years until one of the dogs chomped his way through the upholstery during one stressful stormy night.

Over the years we gradually lost touch, we moved house a few times and the link was broken.   I still  have several of Carol's pieces about the house, a stick stand, a bread bin which I use to store bags of flour (not getting caught out by the panic buyers again) and a wooden trunk which was originally a pigeon-carrier.  They are all in use and have been greatly enjoyed ever since I bought them from her.

It seems that the bearded journalist is her youngest son.   I remember him as a very quiet chap with auburn hair, but other than that I don't remember a huge amount about him.    These days he is a well respected freelance journalist who also writes articles for The Independent and The Guardian newspapers and various journals on the other side of the pond.   He lives and works in U.S.A.

The second article I turned up was a rather wonderful piece that he had written about his mother, her early life, how she met his father, and lots of background details which I vaguely knew, but not in detail.      He wrote very movingly about how his grandmother had suffered from Alzheimer's Disease and the fear that she would also fall victim to this disease had caused Carol huge anxiety throughout her life.

It would be about three years since he wrote the article, and she had already been in a nursing home for a couple of years.  Her husband walked along there and visited every day, sometimes she would hold his hand, other days there would be no recognition and she would wander off saying she had chores to do.

I won't put a link to the article, but it was an amazing read, beautifully written.   I hope that Carol got to fully appreciate her son's writing ability before this terrible disease took over.

I hardly dare think about what has happened to Carol and her family since then.

Please don't feel that you have to comment.   This is something I had to write, for Carol and for myself. 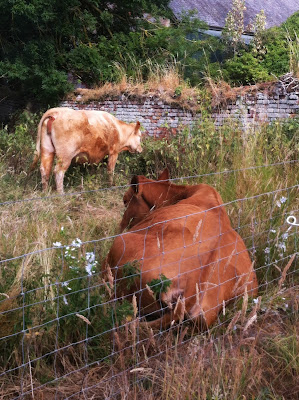