Sometimes Mother Nature offers up beautiful moments, usually when I don't have a camera to hand.  So it's lucky for me that I have good visual recall, because a few days ago I was given three marvellous gifts.

Max and I were travelling down a quiet country lane and were treated to the sight of a female Muntjac and her fawn, they froze for a moment as they watched our approach and then they quietly melted away into the undergrowth.   It was such a joyful sight in the early morning sunlight, over so quickly, yet burned into my memory banks.

Later that afternoon I was walking Bill, a Jack Russell type terrier, down by the gravel pit ponds when we saw a mama duck with her twelve little ducklings.   They were very young, mere dots of fluff, yet they swam in tight formation, speeding up and slowing down in unison, still keeping that tight formation, which was worthy of the Red Arrows.

It was a beautiful sight.

The crowning glory came later that evening, down at Cowslip Cottage.  Max was still working so I strolled out into the garden to watch the cattle in the parkland behind.   One moment they were all quietly grazing, eating supper, meandering along, when suddenly one young calf started cavorting around and was quickly joined by seven others.

Their excitement built and soon they were tearing up and down the field and having so much fun of the kind I normally associate with lambs.   It was beautiful, although it made me sad for all the calves who are reared in less than ideal surroundings like this, without the social structure of a herd and in a large area of park to graze and roam.

Their mothers just carried on eating, so perhaps this is a regular routine.   It all ended when the leader of the gang raced up to 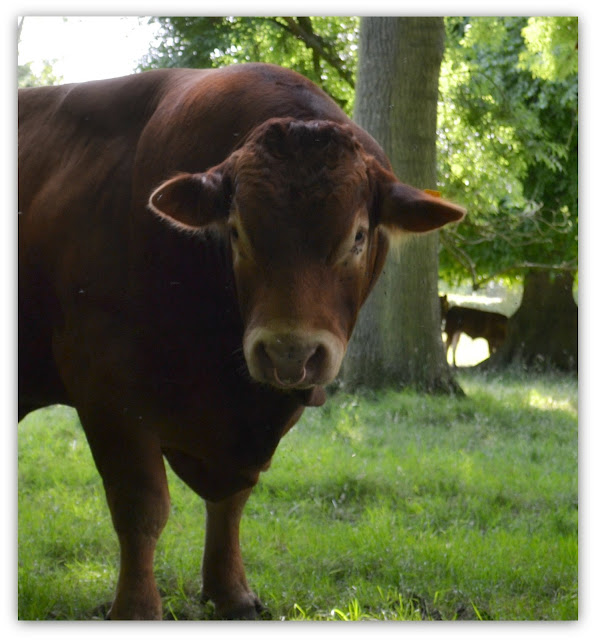 He gave a bellow as he was suddenly surrounded by a big unruly gang of his offspring and I held my breath as he began to rear up.   Thankfully, the bellow must have been simply one of shock because he quickly steadied, the calves quietened and stayed around him for several minutes before drifting back to their mothers.

Perhaps they let off steam like that every evening.


Late yesterday afternoon I was standing in the garden room watching a pair of squirrels race up and down and round and round a tree.  They seemed to be having such fun.

As I watched the squirrels, out of the corner of my eye, I saw another movement.  Two rabbits were racing each other, they ran from one tree and around another then back again.

Then a lovely robin landed on the back garden gate and another beautiful image was fixed in my mind.    He looked stunning as he perched on the old metal gate.

You will have all this happening on your doorstep.

No need for a television or David Attenborough wildlife programmes.