The Decline of the Village Hall

There is an open meeting being held in the village hall tonight, something of a last gasp effort to try to keep this community resource in business.     I shall attend, of course, although I fear my feelings are somewhat mixed.

Of course we should do everything we can to try to keep things going but Little Bunting is a very small village and the hall is even smaller.    As always, there are those few who work hard trying to keep things going for everyone to enjoy, some who will turn up for events and disappear before the cleaning-up begins,  but there are even more who simply do not support any event.

In the past this small village, combined with the two even smaller ones nearby, used to have a real sense of community and the village hall was where everyone came together.

Times change, the demographic has changed, people no longer feel the need to come together in the village hall especially when what has been on offer is stuck in a time warp... bingo, beetle drives, and table top sales of the most cringe-makingly awful kind are simply not going to attract people, certainly not more than once.

Anyway, a meeting has been called and I'll go along.

The tiny building in my header photograph is not the village hall, but it could be. 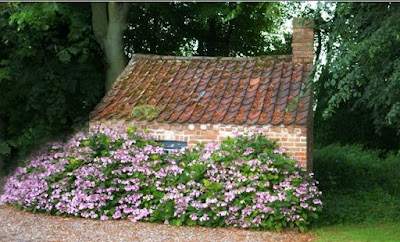 Well, that was a really interesting evening.   It began with just the Chairman and me, relief in his eyes when he saw that at least someone had showed up.    We set up a dozen chairs and a couple of tables, wondering whether we were being a little optimistic.

Threaten to take away their toys and you do get a reaction.

Twenty-two members of the community trickled in - some of them newcomers to the village, others who have lived there for a decade or more but who never support any of the functions.   They were surprisingly vocal.

The end result of this meeting, which deviated somewhat from the original aim, was that the residents of the village want their annual village show.   It is a huge event (for villages like Little Bunting, Butterbump Splash and Dovecot Dell) and it doesn't organise itself.  They want one to be organised ready for August 21st.

The people demanding it be thus have no idea of how much time and planning and sheer hard work goes into an event like that.   Normally the programme would be delivered to the community months ahead of the show so that people can grow the appropriate flowers, vegetables and begin making their craft/art projects, alcoholic drinks, etc.

Four weeks.  That is what we have got.


So the silent and inactive majority have spoken.  They want a show and they want their village hall kept open.   We'll jump through the hoops and perform a little miracle.  It is up to them to support it.  Fingers crossed, but don't hold your breath.
Posted by Elaine at 06:15