A Big Step Forward and Recipe for Homemade Fly Papers 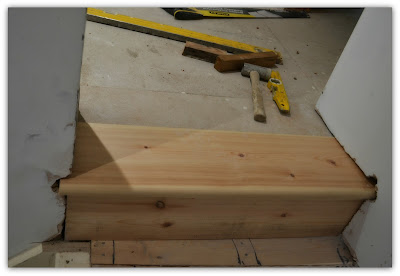 This plain and 'simple' step represents a huge amount of progress.   For the last eight months, or so, we have all had to step over a void - well not really a void, for it is Spaghetti Junction under that step.   All the major wiring of the house passes through there on its' way to the consumer unit down in the hallway.

This is how it looked yesterday - beautiful in my eyes.   It could take quite some time for me to get used to there being something there, though.   I still tend to take a large stride over it.

Max has worked some magic on it today and it has now been further shaped to fit in beautifully.   I think you will be pleased with it.

He has also worked at putting all the floorboards back in the small study area, for this is another area which proved to be something of a meeting point for many wires.    It looks great.

Despite playing hookey yesterday morning, I have spent several days sanding, sealing x 2, light sanding, priming  and painting with light sanding all the windowsills, and I am now ready to give the top and final coat to them all...  Just architraves on most of the doorways and about a million metres of skirtingboard left.

The other day we had most of the windows open and lots of pesky flies came in, there was nothing for it but to get out the flypapers, an old fashioned method, but it works.   As you know, I do not do sprays of any kind unless there is absolutely no other option.

The handyman shop must sell loads of these, they sell so many that they sometimes run out of them, which is a bit of a nuisance, even though we buy them by the box load.

The late food blogger, Shirley Goode, once gave a recipe for homemade fly papers.   I haven't had the chance to try it out yet, but the time will come.

So to make sticky flypapers, you will need:

Add the ingredients to the milk, stirring until dissolved, then bring to the boil and simmer for 5 minutes or until thickened.

Set aside to cool.

Meanwhile, cut long narrow strips of brown paper, make a hole in one end and then roll them up.  Drop them into the mixture until they are soaked through.

Remove from the sticky mixture, unfurl and place on a cake rack to dry.

Thread a piece of string through the hole and hang your flypaper somewhere suitable.

By 'suitable' I mean somewhere that you won't keep walking into it.   I've done that before.   Most unpleasant!
Posted by Elaine at 17:54