Life and Death in a Barley Field 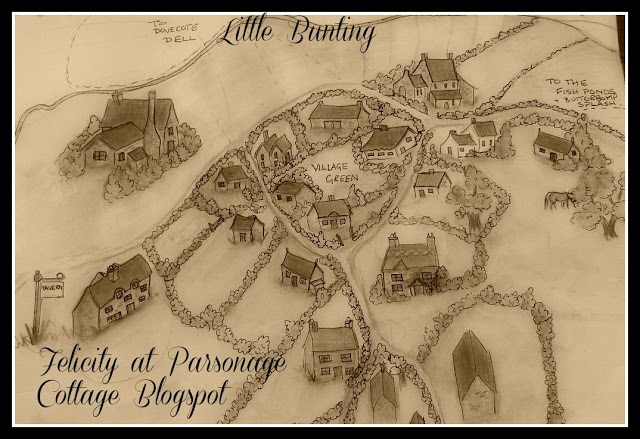 Parsonage Cottage is almost surrounded by a large barley field.  At the moment it is green and lush, like a beautiful lawn which softly undulates with the first/last ripples of the Lincolnshire Wolds.   You could be forgiven for thinking it very dull. 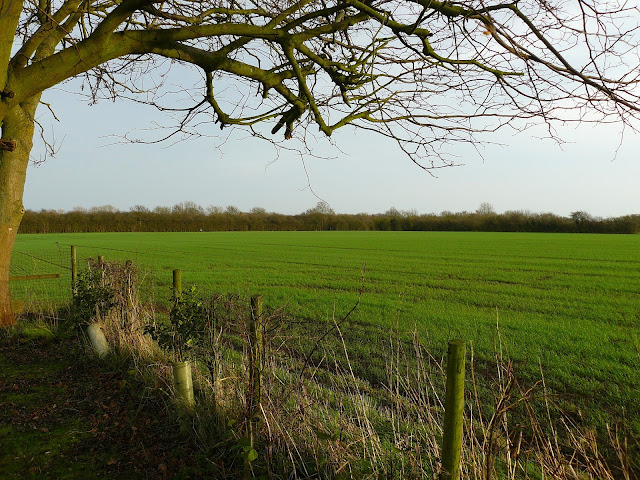 During December I have been witness to two murders and have seen another body carried off in triumph...Midsommer has nothing on this killing field.

Walk quietly, keep your eyes on full alert and you may be lucky and see the tiny muntjack deer.   You could certainly see plenty of tiny hoof marks on the heavy clay soil because muntjack deer cut through the field on their way to somewhere else - perhaps they go to the trout farm or the watermill for a drink.   I have come close to two of them recently.

A few days later I was walking Dobson along the side of the old railway track and saw a stoat.    It was cutting across the field at right angles to the railway line, completely oblivious to everything around.   When it did catch sight of me (Dobson was away in the distance following some exciting scent or other) it sat, looked at me and then ran for cover.   It was one of those magical moments when,  just for a heartbeat,  you have eye contact with a wild creature.

Albert, the lonely seagull, made the field his home for several weeks after harvest.   He was one lone and lonely seagull.   I worried about him.   Luckily, he was later joined by two others and they have all since disappeared.

Sometimes the big grey herons spent a few hours in the field.   I have seen as many as seven at any one time, but I happen to know that they are only part of the larger group of herons which live just over the railway line, they number seventeen.

I spend a lot of time counting them as I walk Dobson.  They don't make it easy.   I have given up on trying to photograph them, they don't let me get that close.

Of course we have the usual quota of rabbits and pheasants plus the occasional fox or badger.

At night we hear lots of calls from the tawny owls, but rarely see them, although  I do sometimes see a big and beautiful Barn Owl flying around the perimeter of the field.   On one occasion I had the spine-tingling delight of the owl turning his head to look at me.

However, we also get to see the reality of wild animals.     Just this month I have witnessed an enormous buzzard grab a rabbit and then proceed to eat it while two equally large buzzards waited patiently just a few yards away.    It was a remarkable sight.

Then there was the case of the screaming rabbit being hotly pursued by a stoat.  The stoat won and proceeded to eat his meal, magpies later flew down to finish what was left.

The third incident involved a dog walker, a terrier dog, and a pheasant.    Let's just say that one got carried out of the field by the walker and it wasn't the dog.

The field has plenty of rats, moles, mice and toads, depending on the time of year and how well you keep your eyes open.       So, a big open expanse of farmland is never as quiet, or as empty, as you may think.

Poppy and Miles, a photograph of the three cousins enjoying a bit of fun today.xxx 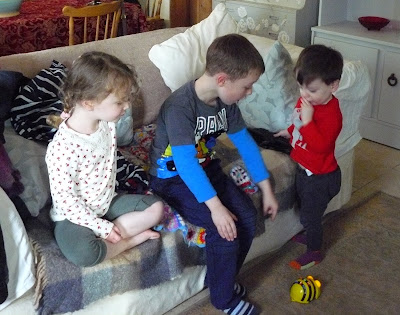 As I approached the village hall I could hear the sound of music.   No, not Julie Andrews & Christopher Plummer.   The sound of a ...