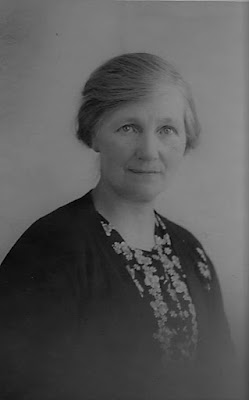 Meet my Grandma.     Her name was Martha, but she was always known as Cissie.

This second photograph is of her mother, my Great Grandmother, Sarah.  She had nine children, eight daughters (my grandmother was her second daughter) and one son - he was number nine.   Perseverance and persistence paid off! 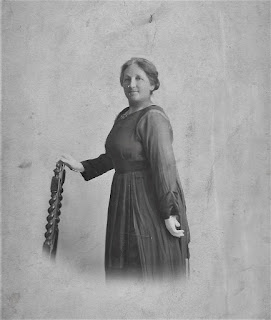 Sarah's mother-in-law, my Great Great Grandmother, was another Martha.   The only image I can find of her is this photograph of some portraits which one of my distant relatives owns.     The man is my Great Great Grandfather.    He looks very stern, and from what I have read about him he may well have been so. 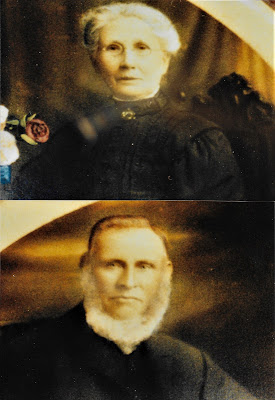 The star of this post is my Grandma - Cissie, the woman in the first photograph.    She looks so sweet and quiet, though I do detect a core of strength in her, or perhaps that is because I know her story.

Around the end of the First World War, Cissie met a man and fell in love.

Before long she discovered that she was pregnant, and in early March 1921 she gave birth to a daughter, my aunt.     Cissie was 37 years old and unmarried.

To put this in context, this was just after the first world war when women over the age of 30 had only just been given the right to vote, and workhouses were still in existence.    People who couldn't support themselves and their children, or who were not helped by their family,  would be likely to end up in the workhouse, a place to be avoided if at all possible.

Some families would quietly absorb the child into the family group, others would have their 'errant' daughter sent off to be confined in a mental institution, there are many cases documented where this resulted in the women being incarcerated for decades, simply because they had a child out of wedlock.

I won't explore all the avenues of thought and fact on this subject, tempting as it is, I will try to stick to the story.

Cissie had met the love of her life, we don't know how or when.    It was scandalous enough to become pregnant, but the 'sin' was compounded by the fact that he was a married man and already had a family!

Today, this would be a fairly unremarkable story, but it all happened almost a century ago and must have been quite scandalous.

Somehow it was all 'managed' and grandfather's two families (the children, not the first wife) became friends, indeed we still are to this day.      Of the enormous pool of relatives, the ones we mostly socialise with are from this branch of the family and Cissie is still remembered with enormous affection by those few remaining ones who are old enough to remember her.

My great grandfather was never mentioned in family folklore, so perhaps he disowned his daughter for bringing such shame upon the family!    Maybe he was as strict and unbending as his own father was reputed to have been.

Great Grandma was quietly supportive;  my mother used to delight in telling me about the enormous wicker hampers, filled with food and clothes,  which her grandma regularly sent to them, right up until her death when my mother was ten or eleven years old.

My mother, born six and a half years after her sister, knew about the other family, visited them, played with them and loved some of them.      She grew up believing her parents to be married, but hadn't given it much thought, until she fell in love with my father.

They became engaged, began to plan their wedding.   Documents were required for the legalities.   To her total devastation she discovered that her parents had not been married and that she, to use her own word, was a bastard.     That had a deeply wounding and profound effect on her and scarred her for the rest of her life, but that is another story.