The Pig Who Caught a Cold 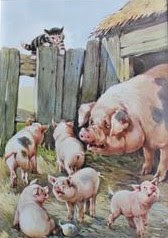 Old Fred lived in our village almost a century ago.   Like many people in those days, he kept a pig in a sty at the bottom of the garden.   His pig was lovingly cared for and fed as well as any pig that was being fattened for the table.    It was Fred's pride and joy.

Unfortunately for Fred, just before it was time to slaughter the pig, which would have kept him and his family fed for the best part of a year, it became unwell.   Old Fred decided to stay up all night to look after it, but the pig died in the night.   The next morning Fred asked a friend to help him bury it.

A little later that day an even older neighbour called in to see him, and was told the sad news about the pig.

They dug the pig up, cleaned it off, bled it, hung it until the next day and then cut it into various joints and shared it with the neighbours.

Amazing as it seems, no one was any the worse for it.


This tale was told to me by our lovely Miss Read, she assures me that it is a true story.

*code=cold in broad Lincolnshire, or so I am told.