My Kitchen in October 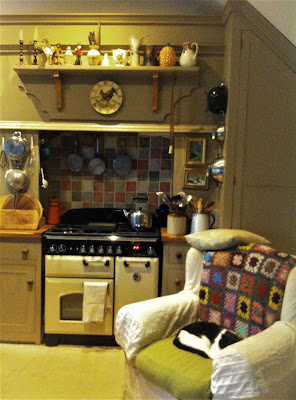 Designed for practicality, not looks.   I like to have my most frequently used kitchen tools handy!

My excitement over my potential quince harvest was somewhat tempered by the surprising contempt in which these golden globes are held by so many people.

We planted two quince trees last year, one lost all the fruit very early on, the other one has gone on to produce three dozen beautiful fruits. 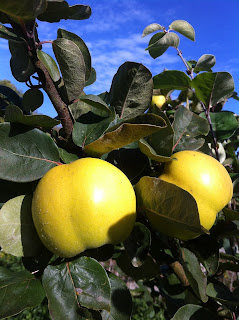 I had hoped that they would have a few more days of sunshine to help ripen them, but the weather has other ideas, about a quarter of my crop has fallen, due to the high winds.    Four more fell while I was typing these few lines, so I have been out and picked the lot, rather than risk having them all bruised.  I have thirty-two of them left, some are huge, others quite small. 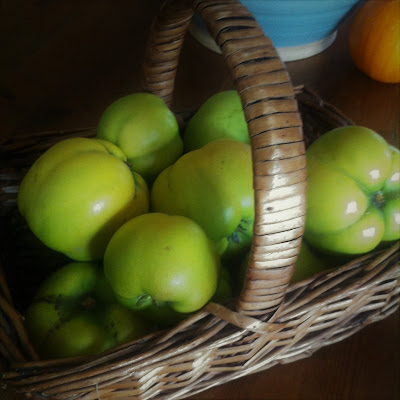 People complain that they are rock hard and difficult to peel and cut, but I found them surprisingly easy to prepare for cooking, so far so good!   I put two of the smaller ones into an apple crumble, grated, and then mixed in with the apple.     Wonderful.   The fruit took on a pretty pink colour and the flavour was greatly enhanced.   Success!

There are lots of recipes I intend to try out, but next I wanted to try out a savoury dish, stuffed quince.   It was simply quince cored and cut in half, then baked for twenty minutes.     Make some patties out of finely chopped onion, mince, spices/herbs/seasonings to your taste.   Put one on each quince half, then bake for another 25 minutes.     I made a fresh tomato sauce to go with it, but gravy would do, then served it with brown rice and buttered kale.

I would normally insert a photograph, but my phone is refusing to let me share any pictures at the moment..

It was delicious - and no, I didn't use real mince, I used a vegetarian substitute, because that is my choice.   Meat eaters could use lamb, beef, goat, camel, whatever animal you fancy!

So far, so good.   They are delicious, sweet or savoury.   Each and every one will be used in the kitchen.

Fresh bread for Friday, crusty, chewy and delicious.  A quick and easy no-knead loaf fresh out of the oven.

Yet another photograph which I can't share, even though it let me send it to instagram.   Hey ho!

There are gremlins at work.

Ha, I have found a way round it - here is a cropped screen shot from IG. 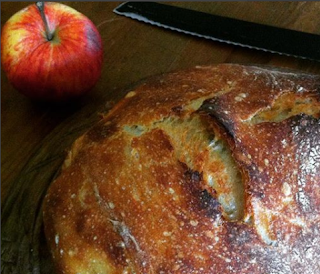 The new cooker is working well, so is the double ended wood burner stove at the other end of the kitchen.     It has been a mild autumn so far, so we haven't had to have the heating on, but I must admit that just every once in a while I have found myself backing up towards the cooker, to warm my back (!)  in the way that I used to do for the Rayburn - only to realise that it is no longer there.

Tomorrow I plan to bake a quince cake.    I also need to help my grandchildren to make a large salt dough sheaf of corn, they have to decorate a church windowsill for harvest festival.     That should be quite fun.     I have gathered some bits and pieces which may help them, some hessian, a couple of baskets, some lovely long leek seed heads (to give height to their display) a couple of home grown pumpkins for colour, the wheat sheaf we can make, plus anything else they think may do the job nicely, the church mice could be enjoying themselves for a night or two!

Much of my time is still being spent on making the fairies, why oh why didn't I just make a few each month throughout the year?

I love it really, personal dresser to fairies, what is not to like?

The cats love it, especially old Sparky.   She steals any glittery trims or ribbons she can get a hold of and the wooden balls which I use for heads are whisked away for a great game of football.   Toby watches with amazement as she whizzes them all around the conservatory floor, he glances at me, then back at her and presumably wonders how she can get away with it.

I need to head off to try to sort out my mobile phone problems.    Enjoy your weekend.
Posted by Elaine at 19:42