The First Celebrity Chef on Television 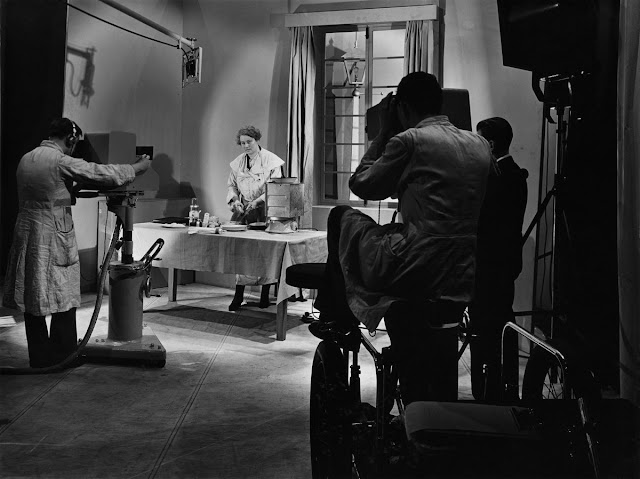 This photograph shows Moira Meighn, the very first 'Celebrity' cook to have a television programme,  in a BBC studio.     This was 1936 - two decades before Fanny Cradock and her long-suffering husband.

I have a couple of her books on my shelves and if they are anything to go by, she was a very interesting character.

'The Magic Ring for the Needy and Greedy' was published in the interwar years.    These were difficult times, money became tight, and she had to let her marvellous cook 'go'.         Unused to doing her own cooking, she struggled to use the cooking facilities, both the range and an enormous gas stove defeated her.    Then someone advised her to adapt her recipes and cook on a single ring...

That sounds like a whole different nightmare to me, but she embraced the idea and the book is the result.

I haven't yet been able to uncover exactly what her background was,  but there is a clue in this:

"My only real hardship, when I first went completely servantless, was having to get out of bed to make my own early tea in the morning...".

She says she and her family had to move into a bed-sitting-room, a minute place for which they paid the price of a Park Lane Palace.    "it had every drawback, including rats and no washing-up facilities".

Her new kitchen consisted of two upended sugar-boxes, a large tin tray and a single-burner oil stove plus  a spirit-gas picnic stove on which she regularly cooked meals for three - often six or eight grown-ups and sterilized the baby's bottles, heated the water for baths and made toddy when the nurse, who slept with the baby in an adjacent 'hutch' woke us during the night to help her fight hordes of rats.

They were still able to afford a nurse to look after the baby, and to do lots of entertaining.   Not quite that impoverished, then.

There is a paragraph in which she states that "Every girl child should receive a cookery thermometer as a christening gift.    Children should also be be given real tiny pots and pans and a workable methylated, or oil-stove, gas or electric ring.     They should all be assembled on a white enamelled tray and the child should be taught to use them before the age of seven.

"A child trained sensibly will soon realise the danger of fire..."


My daughter will be gratified to learn that I am not going to give our six-year-old granddaughter such a gift.